This weekend was so fun… so fabulous… and now I am in some serious recovery!  Between the food, the cocktails, and the sunshine, I don’t know how people in Southern California get any work done!

We flew down early Thursday morning, and checked into The Standard around noon – perfect timing for a lunch poolside and our first cocktail!  If you’ve never been to this hotel, you really must – not that it’s fancy, but it kind of feels like you stepped back in time, and walked into the 1960’s.  The lobby is awesome – shag carpet, tall cacti, orbital swings, and let’s not forget the girl in a glass fishbowl behind the reception desk – naked, and browsing through magazines.  No I am not kidding.  It’s one part jarring, one thousand parts awesome.  (Unfortunately in the below picture, the light from behind her is so bright, you can hardly see her!

Our first night we ate dinner at an amazing restaurant called Firefly – it is perhaps one of the most romantic restaurants I’ve ever been too – it’s mainly outdoors under a canopy, and nearly 100% candlelit.  Candles lining the fireplaces, in little lanterns over the tables and built into the walls.  It feels like you stepped into a little fairy land.  And the food?? Ridiculously good.  If you are in West Hollywood, make the drive over the hill to Studio City and try this place!

This is what Firefly looks like with the flash on… oopsy!!

After dinner we headed back to our hotel to try out the club there.  Turns out that Thursdays at The Standard are “Simon Says” parties… aka Tranny Night.  Again… amazing!  We danced until the wee hours with some of the most gorgeous gay men, and their tranny entouages.

The next morning, none of us were feeling well, so we put on our bikinis, and layed by the pool, keeping the Cabana boys busy getting us food and drinks for hours.  My kind of day!  I read my book, listened to music, and ate a lot of sweet potato fries 🙂 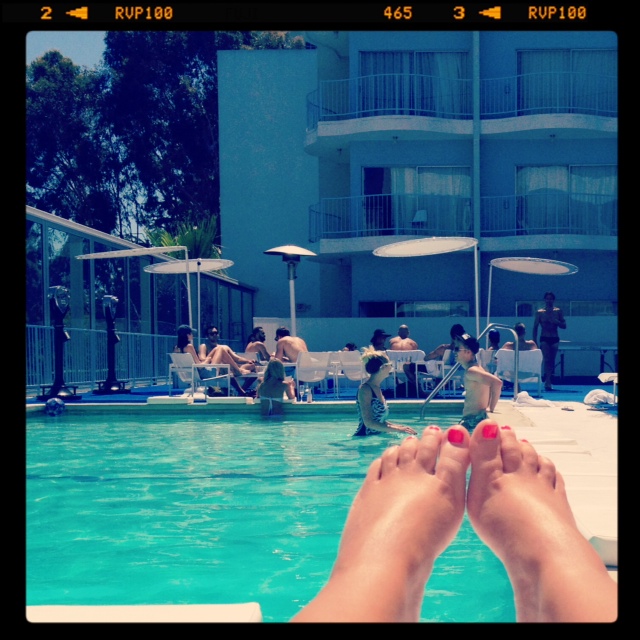 After about three thousand pounds of fried food, and a catnap, we were feeling refreshed and ready for dinner. We went to Katana – a swanky sushi restaurant on Sunset.  I don’t know if this place attracts straight male models, but we were nearly mute the entire meal watching the most handsome (and straight) men in the world come through with their lady friends.

After dinner, we walked across the street to the Mondrion Hotel’s Sky Bar – another super fun spot.  They have a big pool lined with sofas and it really is so beautiful.
Unfortunately, something happened to their license for amplified music, so it was eerily quiet inside – not the dance party we were expecting it to be.  Not to worry – some of our friends from SF were also in LA, so they came and met up with us, made us laugh, and made us forget that there was zero music.

On Saturday, we learned that The Standard throws some pretty incredible pool parties each weekend, so the next day was spent people watching poolside.  The DJ set up around noon, and the pool became quite a “scene” – lots of thongs, lots of spray tans, and lots of gay guys in their speedos.  In short, it was pretty much the opposite of my life in SF… except for the gays, but they are normally clothed here 🙂

Our last night we went to Katsuya in Hollywood which was by far the BEST sushi I have ever had.  We headed to the W afterwards, and ended up on the rooftop club, Drai’s.  Had I known what an awesome place this is, we would have been there all three nights.  It was HUGE, filled with glowing lanterns, fluffy cabana beds, and had incredible views of LA.  What surprised me the most was how kind everyone was in LA – I had thought everyone would be a snobby aspiring model, but we met some of the friendliest, most genuinely nice people.

Anyway, it was a whirlwind weekend that has left me totally and utterly exhausted – I have sworn off alcoholic drinks for the foreseeable future, and I really need to get back on the work-out wagon, BUT it was such a fun summer escape, and I’m already dreaming of our next one!