Notice anything different about my little blog???

I totally had another post planned for today, but last night, I had the urge to completely re-design my blog logo.  Our house is a complete mess right now, so I should have been cleaning things up, but I had an itch… and I just had to scratch it!!

In case you’ve already forgotten, here was the old logo: 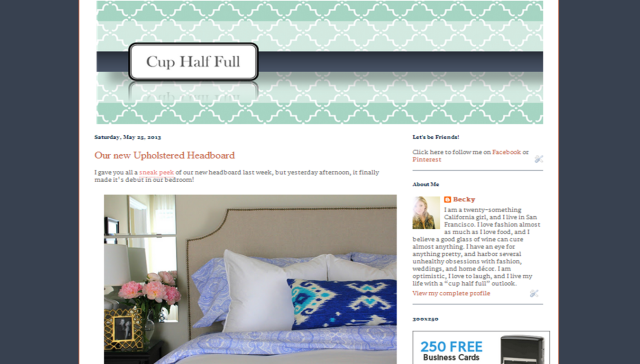 Nothing WRONG with it… but it had been the same for almost two years, and while I still like the color palate, it had been bugging me for a while…

So to the drawing board I went…

I wanted to create something slimmer, so the content wasn’t pushed SO far down the page, and it just seemed so impersonal.  I love a good trellis pattern – you KNOW I do – but it was time for a change.

This was the first concept I came up with…

I like how it’s cleaner, and more simple, and that not only does it feature two of the projects that I’ve done that I’m MOST proud of, but it also shows one of the most gorgeous photo’s I’ve ever snapped on my iPhone… kind of impressive, no??
Take II – my second attempt to tweak the logo:

Anyways, I do like how the stripes add a little graphic punch, but I wanted to try it out without the framed border…

Clean… I liked it… but with the stripe centered like that, the logo felt unbalanced…
Take IV:

Narrowing the stripes to underscore the title and sub-text felt better to me – still fun and graphic, but a little more clean and balanced…

But some of my favorite blogs have very minimal headers… I tried to simplify:

No stripes – just the script and my photos…

Perhaps it needs texture??  Also, is it odd to just have photos grouped on the right hand side??
Take VI:

I liked the texture of the linen background, and I went back to the stripe again because I felt it did a good job of dividing the logo from the rest of the blog… but was it getting too busy?
The final version was a cleaner background, and a different font (yep, throwing yet another element in to change…) 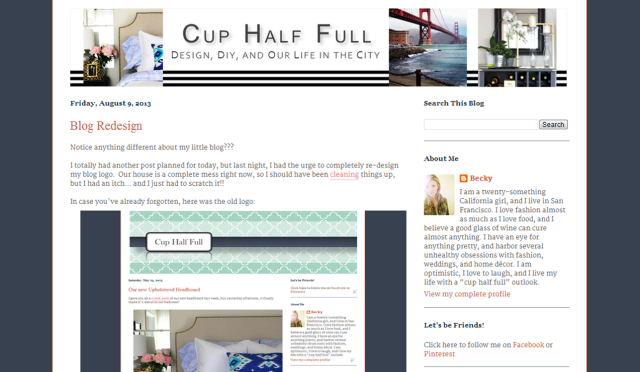 Oye!
At this point, I decided to call it a night.  I was (and still am) very confused, and it was getting late, so I kept the final version and decided to sleep on it…  I’m still not sure what I think.  Do I love it?  Do I hate it?
Clearly, I need other opinions… which one is the right one??  Favorites???  Do you hate them all?  BE HONEST!!  Should I go back to the drawing board??
Help!!