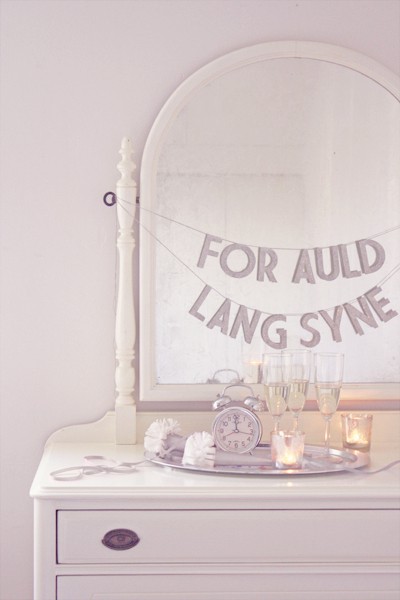 Source
One of my favorite movies growing up was Anne of Green Gables, and one of our favorite lines in it was, Tomorrow is always fresh with no mistakes in it.  It’s just a nice thought that every day is a fresh start, with so many possibilities.  Right?
Yesterday ended up being vastly different from how we’d planned – shortly after posting about our fabulous NYE agenda, I got a frantic call from Kris, saying he needed to go to the emergency room.  One of the worst moments of my life by far.
While surfing in the morning, the fin on the bottom of his board gouged through his wet-suit, leaving him with a really deep cut.  About six hours and 10 stitches later, they released him from the ER, and now he’s back at home, on the mend. We are just so thankful that there will be no permanent damage, and that he should be back to normal in a few weeks.
Regardless of how 2012 ended, it was a wonderful year, marking so many milestones for us.
It was the year we moved in together… and we didn’t kill one another in our small one bedroom 🙂  Far from it.  Living together has made us closer and stronger, and and it’s made us understand one another on a much deeper level.  It’s funny to think back now to just over a year ago, before moving in – it’s amazing to see how much you change in such a short period of time.   I dug up a few old posts from fall 2011 – I literally laughed out loud while reading through them.  I was so nervous in this one, and so determined to get my way in this one even though it was masked as “compromise”. Sneaky girl.  I would day dream about how our life would change, how our apartment would look, and what was to come.  It turns out, it only gets better.  I love Kris more every day, especially when he brings home flowers, puts a fresh roll of toilet paper on the dispenser without me asking, and fluffs (and chops) the pillows, just how I like.  It’s the little things, amIright?? He’s a keeper.

2012 was also the year I dedicated myself to this blog.  It started out as an outlet for creativity, but it’s ended up introducing me to so many other wonderful bloggers, and this awesome, warm community where I’ve “met” people just like me – who want to talk about shoes or home decor endlessly.  This blog started out as something just for me, and has ballooned into something much larger.  It was back in March where I realized, OMG people actually read this!!  A very surreal moment, but also a really awesome moment.  Aside from using this blog as a forum to talk about the things I’m thinking about, share projects I’m working on, get feedback about ideas I have (those striped walls in the entryway??), this blog is amazing for self preservation.  It’s so fun to look back at my life a year ago – or even two years ago – and remember all the little things I’ve forgetten over time.  Now, more than ever, I am excited to see where Cup Half Full goes in 2013, and how our life continues to change.

2013 is going to be a fabulous year – despite it’s ominous start.  I’ll be starting a new job in a few weeks (more on that later, but let me just say, it’s a hugely wonderful opportunity, and a much needed change).  2013 also might be the year we buy a house.  More on that later as well… I don’t want to jinx anything, but it’s definitely something we talk about.  A lot.  2013 will be a year for giving thanks.  Being thankful every day, giving back, and striving to be our best selves.

Today, we keep joking that at least the accident happened in 2012, and that 2013 will be fresh with no mistakes in it.  On a fresh foot in 2013, we are looking forward to a great year.