I would like to preface this post by saying, our bedroom is nowhere near to being finished.  I had become so fed up with the glaring white walls, and the hideous $10 blinds that our landlord lovingly installed… so I made a few changes.  Admittedly, we still need a lot of work… A LOT of work.  The real transformation has been in the dresser and nightstands (original post found here).  You can hardly tell the dis-repair of the nightstands in this very poor “before” picture, but they were no bueno.
Still on the agenda is a new mattress.  Ours is just terrible, but the decision between queen or king is holding up the rest of the room’s progress.  Once we decide on a mattress, then I can move onto upholstered headboards, bedding, and wall decor. 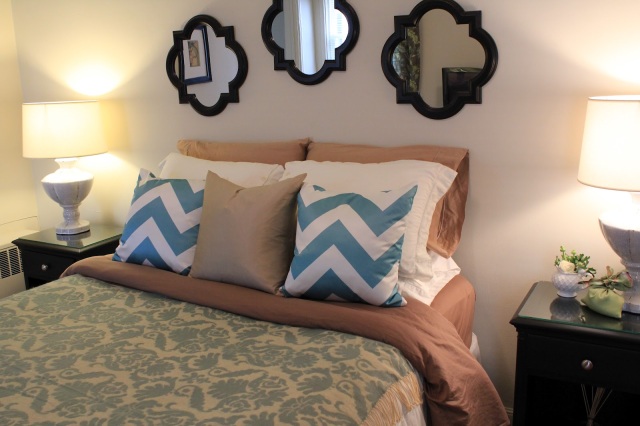 Really, not much has actually changed – I got new lamps which I LOVE, and hung a few mirrors, along with a few picture frames (remember those lovely french photo’s from this post) and some curtains.  I look back at the old lamps and think how teeny they look.  The new ones are much more substantial… really liking that.  I hated the idea of just throwing them away, so I am in the purpose of re-furbishing them – that mini DIY project to be posted soon!! 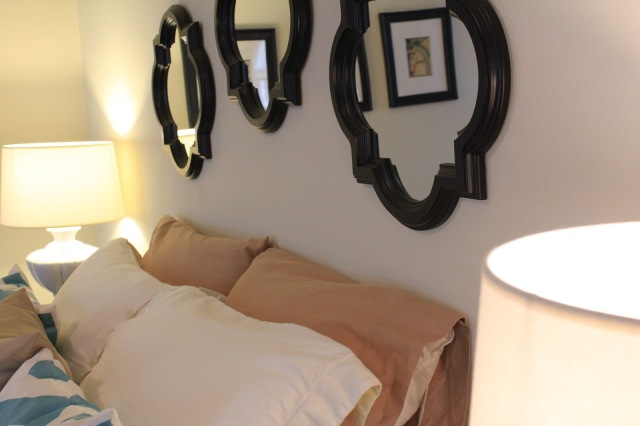 After all the toil to get those quatrefoil mirrors, I am not loving them above the bed.  I think they may be better suited in the hallway or above the TV.  I also think that the row’s of three (three mirrors, three picture frames) is just too matchy matchy, but alas, they will have to stay until other changes are made. 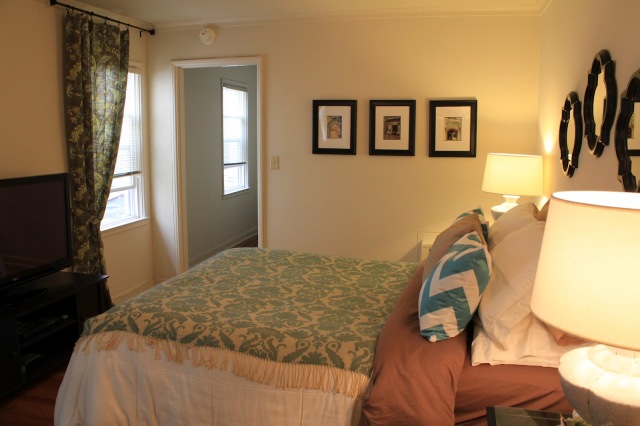 And do you like the new bedding?  I should say… “new” bedding.  Just flipped over the old duvet, stole the chevron pillows from the living room, and laid a cozy throw over the bed (originally because we needed a bit more warmth at night, but it has stayed). 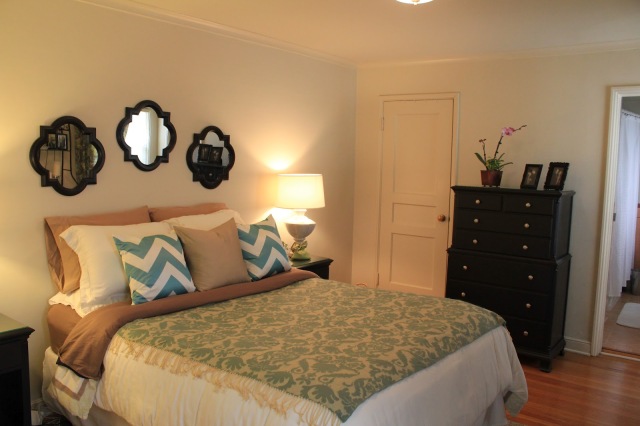 I’ve already got a few ideas cooking, and have been working on a new inspiration board for the bedroom based on my biggest pet peeves and some of the challenges this space has.  Since it’s one of the darker rooms in our place, I’ll need to be strategic… keep your eyes peeled for some ideas here!