Our new bed is here!!! I swear I’ve never slept so well!  With the new (giant) bed in, and our old queen size mattress out it’s time to decorate.  A few updates since my last bedroom post… remember these two bedding options? 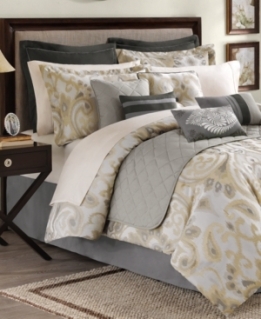 Well both of these are off the table!  Yes, OFF THE TABLE.

I thought I was ahead of the curve when I ordered a few options before the bed arrived.  Well life is never THAT easy.  Dah!! Damn online shopping!  Apparently bedding is one of those things you have to see and feel in real life.

Option I ended up being very “shiny”.  There was metallic threads woven into the comforter, which ended up making it look (and feel) really cheap.  The pattern was pretty, and the colors were exactly as pictured, but it felt like some awful polyester blend.  Woof. Option II was pretty, but it didn’t have the loft we were looking for.  Kris also felt the embroidered quilt was way too feminine.  Can’t argue with him there!

Now I’m on the hunt for a duvet – I’m picking up a fluffy down comforter after Christmas, and with so many duvet options, I’m back to the drawing board!!

We’ll definitely be sticking with light colors since our room doesn’t get a ton of natural light during the day.

I’ve always admired the “Poetical” duvet set from Barbara Barry.  In person, the bedding is a true oatmeal color, and it comes with a pretty pale blue coverlet.  Let’s be honest – I KNOW we are not going to have the comforter folded all pretty at the foot of the bed every day, so that pretty blue quilt underneath will most likely go unseen most of the time.  With all that oatmeal bedding, I worry that this will just be too much beige in a room of neutrals…

Moving on… I am still into the look of “hotel” bedding – a la Restoration Hardware.

I like how this bed below mixes in print with throw pillows – taking the really clean simple bedding, and adding some personality…

This bedroom uses part Barbara Barry Poetical, and part Restoration Hardware Hotel Bedding, with a headboard eerily similar to the one I’m about to attempt… fate?

Using fabric swatches from Lewis and Sheron, I put together a quick idea of a few prints that could compliment the hotel bedding: Is black and yellow too much for a bedroom?  This color pallette is pretty far off from what I’d originally dreamed up for our home, but I like it…

Or what if we kept the bedding all white, and swapped in pillows with different patterns and colors… we could do blues

Clearly, I am totally lost and have no clue which direction to go with for bedding… so frustrating!

4 thoughts on “Why is it so hard to find bedding?!”