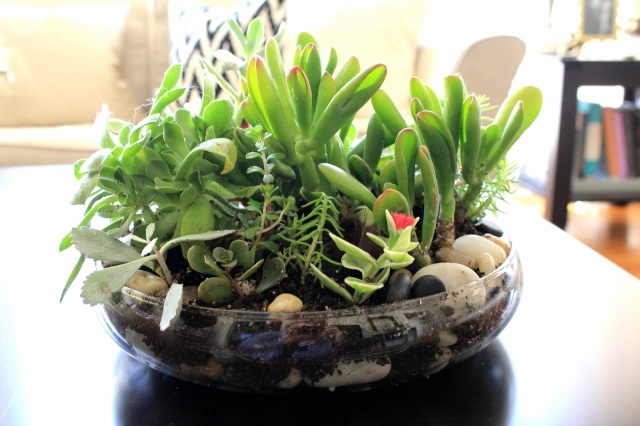 Happy Monday!  Hope you all had a lovely weekend.

It’s been hot here, so I spent my weekend outside – we had a full beach day on Saturday, and spent yesterday picnicking and watching the America’s Cup races.

In between all of that, I also worked on a small succulent terrarium…

Considering, I have the brownest of brown thumbs, I think I did ok!

I read up a bit on how to plant these out, and it turns out, it’s quite simple.  You will need:
– Assorted rocks and pebbles
– Soil with smaller pebbles and sand mixed in
– A planter
– An array of succulent plants
– A flat counter space that you don’t mind getting a lot a bit dirty

A misconception of mine… succulents don’t like water.  They are desert plants, and like to be dry.

No wonder I’ve killed so many already.

It’s not that they don’t like to be watered… they just don’t like to sit in water… thus the pebbles, rocks, and sandy soil.  This all helps with drainage, and will be key to prevent me from killing these plants.

See the rocks down at the bottom??  I spread a solid foundation of rocks and pebbles before planting the succulents, so that when I do lightly water them, the water is able to drain to the bottom, preventing the roots from being boggy and wet.

This also will allow me to water them pretty in-frequently.  Amen to that!

Want to hear something crazy??  West Elm sells similar terrariums for $99 EACH!

I had a lot of issues keeping the dirt off the plants when I was adding soil around them, and unfortunately for me, their waxy texture is holding onto that dirt as though it’s life depended on it.  Ugh.

I tried wiping it off, using a duster… I’m hoping that over time, it will go away on it’s own??

I’m pretty pleased with how it all turned out.  Look how pretty and bright green they are!!  I’m doing my best not to kill them this time, although I’m not entirely sure how long they will last.