I’m in Portland this week for work, and after checking the weather online yesterday, I realized that that I would be going from 80 degrees and sunny to 50 degrees and rainy.

I needed to get myself in the correct mental state for cool weather, stat.

So I made pumpkin bread.

I mean… you GUYS!  This plate, could not look more “Halloween” if I tried!!

Aside from it looking like fall, and our house smelling like a haven of pumpkin spice, it is AMAZING.  Like unbelievably good, and soooo easy to make.

The recipe said that all you needed was yellow cake mix, and canned pumpkin.

Let me start by saying, I LOVE yellow cake.  In my heart, I KNEW, that this recipe could only end in success, since we were starting with the base of my favorite sweet treat in the world.  As I went along, I doctored the recipe a bit, and found that I needed (and wanted) a few additional ingrediants.

As I was mixing, the batter was really REALLY dry, so to get the mix fully incorporated with the pumpkin, I added a little bit of milk.  Roughly two tablespoons did the trick to get it fully mixed in.  I also added roughly a teaspoon of vanilla extract, a few dashes of all spice, and about two teaspoons of cinnamon.

All I have to say is, you have to try this.  It’s cheap, and simple, and apparently somewhat healthy since there’s no added sugar (two weight watcher points per piece… or so says Pinterest). 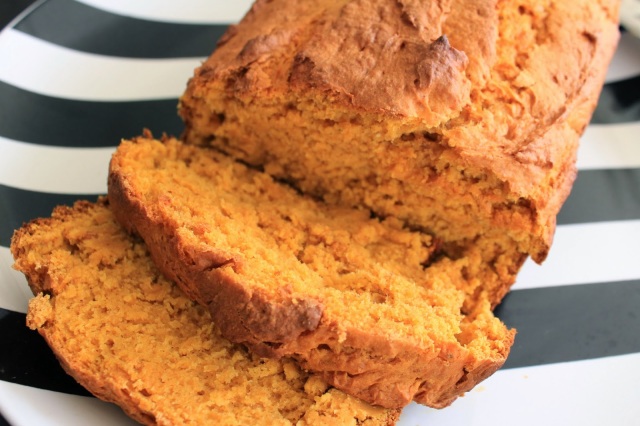 The recipe is for muffins, but I made a loaf of pumpkin bread since I apparently don’t have a muffin tin (how is that possible??)

I baked it until a knife came out clean – roughly 45 minutes – and even so, the bread is SO moist, without falling apart or being gooey.

You have to try this!  For once, the recipe turned out to be both easy AND good… you really can have your (pumpkin) cake and eat it too.