Skip to primary content
I guess our “Indian Summer” is officially over. The last week has been cool and crisp – you can see your breath in the mornings, the wind was howling all last night, and it was the first time in a while where we had to put an extra blanket on our bed…
Just like that, it’s fall!

With the cool weather finally upon us, I decided to make soup.  Butternut squash soup to be exact, and it could not have been easier!

I didn’t use a specific recipe, and eyeballed pretty much everything, but it turned out amazing, and I pretty much guarentee that this is going to become one of our fall staples for supper this year.

Here’s how to make it…

Ingredients:
– One large butternut squash
– Half of a yellow onion
– Three large cloves of garlic
– One low sodium carton of chicken stock
– Sprig of Sage
– Olive Oil
– Butter
– Half and Half
– Salt
– Pepper
– Cinnamon
– All Spice
– Chili Powder

Recipe Instructions:
Use a regular potato peeler to peel the thick skin off the butternut squash.  It’s pretty tough so I don’t recommend a paring knife unless you really know what you’re doing.

Once the skin is off, cut the butternut squash into cubes.  Near the “bulb” of the squash, there is seeds and fiber that you’ll want to scoop out with a spoon.

Once it’s peeled, toss the cubes in a large pot with the chopped up onion and garlic (you can also use shallots, but I didn’t have any on hand).

Coat everything generously with extra virgin olive oil, and a sprinkle of salt, and get things sauteing. As everything starts to cook, add in a bit of butter – I used around 3 tablespoons, or roughly 1/4 of a cube of butter.  At this point I also added in a dash of cinnamon, a dash of all spice, a dash of chili powder, and a large sprig of torn up sage (about 5 large leaves).

Cook things on medium to high heat until everything has softened a bit – just before the butter starts to get brown, add in the chicken stock.  I didn’t measure at all – just poured until the stock covered most of the butternut squash, about 3/4 of the way – I used about half to 3/4 of a 1-quart carton.

Put the lid of the pot on, and let things cook.  You want to make sure the butternut squash is really soft – let it go for 15 – 20 minutes or so. 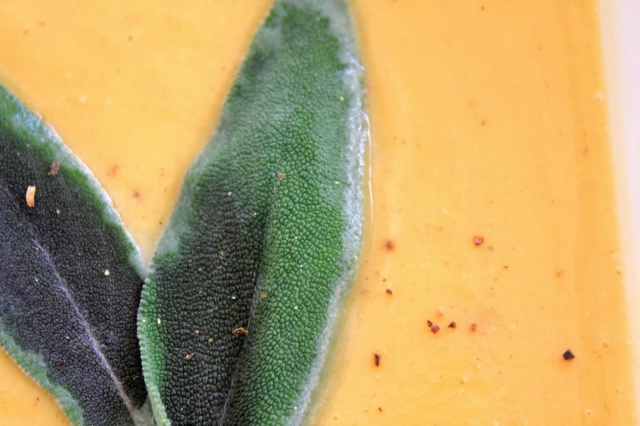 At this point, turn the heat off, and let it cool for a few minutes.  Spoon the cooked ingredients into the blender (in batches) and blend until smooth.  I ended up adding a bit more chicken stock as each batch blended to get it really super smooth.  An immersion blender would have been amazing at this point, but the regular blender worked just fine.

Once everything was all blended, I added everything back into the big pot, turned the heat back on and tasted the soup.  It will probably be pretty bland still – I went with low sodium chicken stock so I could control the salt, so I added in more salt (I’m guessing around two teaspoons or so), along with two more dashes of cinnamon, two dashes of all spice, two dashes of chili powder, and pepper.

Keep tasting as you season – you might like more salt, or pepper, or less cinnamon, etc.  It’s all personal preference at this point. I also added a splash of half and half (only about 1/4 cup).

The soup was already really creamy without it, so you could absolutely skip this step if you wanted to keep this healthier.  Mix it all together, let the ingredients cook a bit more, and you’re ready to eat!

That’s it!  It sounds like a lot of steps, but it was SO EASY, and it only took me about 30-40 minutes total.  Also, it ended up being super cheap!  I think it cost about $8 total for the squash, stock, and sage.
I’m guessing it made about 2 large servings, so if you’re making this for more, double everything.
I ended up garnishing it with a few more sprigs of sage, but if you don’t like sage, feel free to skip it entirely.  I happen to love it, and I find that it really tempers the sweet flavors of the squash.
Enjoy!!